May 16, 2019
Loading...
USNMix Report: In the rising heat ₹ 500 notes broken down on turning,
you need to take care of.
There has been an incident of rupees 500 breaking in Sangli in Maharashtra. As soon as these notes are truncated, notes become fragmented. When these notes were taken to the bank, bank staff said that due to the rising heat, due to the chemical reaction it could be possible.
The matter has now reached the Reserve Bank of India (RBI). Which is being investigated. A woman is a daily wage laborer living in Vita city of Sangli. Who received 7 thousand rupees of wages. 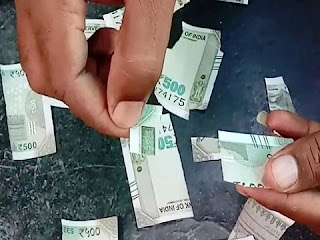 The bank refused to take broken notes
The lady laborer tied them in all the napkins and kept it in pocket. When two days before she pulled the notes out of pocket, it started breaking down. She told his problem to the social worker Anil Rathod living in the neighborhood. Anil Rathod said that when the woman brought the complaint, it was first thought that it could be a fake note. But it was not like that. The notes were real. After this, when the note was taken in the nearest SBI branch, they refused to take the pieces of notes.
Women laborers came in shade after note was broken and pieces on turning the note. Vita State Bank of India Manager said that it may be possible due to rising heat and chemical reaction. Yet these notes have been sent to the Reserve Bank for investigation. These notes will now be examined. This woman has been shocked by the incident of wage labor in this incident. The bank is not changing with the new bank note. It was her deposit money which she had kept with her. Now she is waiting for the RBI to answer.