4 more Jet Airways grounded due to not paid rent

Mar 13, 2019
Loading...
USNMix Report: Jet Airways’s problems are not getting less,
4 more aircraft are standing for not paid rent.
Jet Airways has so far raised 32 aircraft.
Jet Airways, who is struggling for financial crisis, said on Tuesday that he had to park four other aircraft due to non-payment of lease rent. Along with this, the number of aircraft removed from operation has increased to 32 due to the cash crisis and not paying the lease rent. 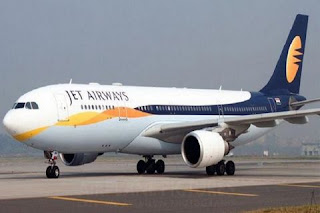 In the information sent to the stock exchanges, the airline said, “We have to set up four more aircraft due to not able to pay the leaseholders under lease agreement on lease.” Earlier, Jet Airways chairman had asked the airline’s equity In a letter sent last week to CEO Etihad Airways chief executive Tony Douglas, he said that more than 50 percent of the aircraft had to stand.
Meanwhile, there was news that Etihad Airways is ready to invest Rs 1600-1900 crores. However, in return, Naresh Goyal may have to resign as chairman of the company. But, they can offer two names. At present, Etihad’s share in Jet Airways is around 24 per cent. If the company investes, its share will be 24.9%.