Skip to content
Loading...
USNMix Report: Airtel and Amazon may invest two billion dollars
in preparation of big deal.
India is preparing to become the world’s digital hub. Amazon may soon invest in Airtel. Ongoing preparations to buy five percent stake.
After the outbreak of global epidemic, the whole world has started becoming disenchanted with China. The proof of this is that many big companies have shifted their manufacturing plant from China to another country. Even though no firm evidence has been found so far, many countries of the world have turned against China due to infection. India can benefit from China’s disillusionment with the world. 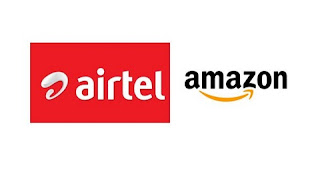 In the coming times, India can become a digital hub. In the last two months, foreign investment of more than 70 thousand crores has come in Jio. According to the report of the news agency Reuters, the American giant is set to invest two billion dollars i.e. about 15,109 crore in the Indian Bharti Airtel. If this investment happens, Amazon will get a five per cent stake in Airtel.
Please tell that Airtel is the third largest telecom company in the country with more than 300 million users. The report of the deal between Bharti Airtel and Amazon comes at a time when many foreign companies are willing to invest in Bharti. Recently, Facebook, KKR and other companies have invested a total of 10 billion dollars i.e. about 75,550 in Reliance Jio.
The deal between Bharti Airtel and Amazon is currently in the initial stage. It can also change in the coming time. Amazon and Bharti Airtel declined to comment on the deal. Let us know that earlier there were reports of a deal between Vodafone Idea and Google, but later the company issued an explanation saying that no such deal is happening between them.

Privacy not secure despite you not use social media