Skip to content
Loading...
USNMix Report: Amazon CEO Jeff Bezos is the richest man
with the help of this man.
Jeff Bezos, the world’s richest man and CEO of Amazon, has shared some memorable moments associated with his life. Jeff Bezos credits his success to his father. He says his father Mike Bezos was not a resident of America. At the age of 16, he left Cuba and came to Florida. According to Jeff, his father Mike came to America alone in 1962 and he used to speak broken English. But he did not give up hope in his life.
Thanks to father for his success
Thanks to the father’s determination, today I have achieved this position and we are seeing the golden moments of life. Jeff said that my father came America with a dream and that came true. I laid the foundation of a company like Amazon and found the title of being the wealthiest. On this occasion, Jeff shared a video on Twitter in memory of his father. 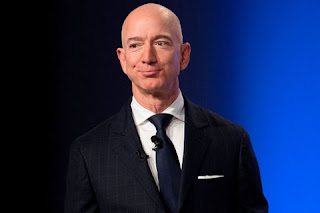 America came at the age of 16

Jeff told in his tweet that when his father was only 16, at that time his father had come to the US from Cuba. At that time he could not speak English properly. But he did not give up hope and gradually learned Spanish. After this, he tried to step up the move with the people of America.
Celebrate father’s life by sharing video
Jeff shared this tweet and video on social media to celebrate the journey of his father’s life. Jeff said that living in my father’s life in America is a testimony to how people help each other. We also celebrated it at the opening of the new Museum of the Statue of Liberty.

At the Statue of Liberty, where my dad’s being honored with a Liberty Star as part of the new museum’s opening. When he came here from Cuba at 16, not only was he all alone, but he only spoke Spanish. His grit, determination, and optimism are inspiring. #StatueofLibertyMuseum pic.twitter.com/DFhR3Dbf7p
— Jeff Bezos (@JeffBezos) May 16, 2019

Mike is not my real father:
Jeff revealed another disclosure that Mike Bezos is not his real father but he gave me his name. Jeff said that when his age was 4, his mother, Jacqueline Gise, married Mike Bezos. When my father came to America, he only had 3 shirts, 3 pants and a pair of shoes.
The first job was in McDonalds
Jeff Bezos did his first job at McDonald’s. At the age of 16, he got the job of cleaning for the first time. They used to clear the catch-up lying on the ground. He did not like this work at all, but due to summer holidays, he did that work. He learned and came forward. Then he implemented his own new company. At the time of his job he lived with his grandparents.