Android or iOS – which mobile platform is better and safer according to Privacy and Security?

Jan 18, 2020
Loading...
USNMix Report: iOS or Android:
which is better and safer? Understand the expert in 5 points.
Currently, only two operating systems are running in the smartphone market. First Apple’s iOS and second Google’s Android. The number of Android users is more than the iPhone. This question is quite old, who is better in Android and iPhone. Sometimes there is talk about security and sometimes performance. Today we will talk about how different the iPhone is from Android and how safe? For this, Our reporter has spoken to Prabhu Ram, head of the Industry Intelligence Group of Cyber Media Research (CMR). Let’s know.
Who is better in performance
First of all talk about the performance, the performance of the iPhone is well known, although now Android smartphones with better performance are also present in the market, but the best thing with the iPhone is that the iPhone rarely hangs, while Android has some time Afterwards, the problem of hanging starts. Apple’s operating system is much smoother than iOS, Android and iPhone’s processor, graphics are also faster than Android in many respects.
In the case of software, how much water
Talking about the software of the iPhone, the biggest thing is that Apple also releases updates for the iPhone around 5 years old, while this is not the case with Android. In Android, you get a maximum of two years of software updates. Apple’s Animoji is awesome. IOS 13 is the fastest operating system at the moment. You will be surprised to know that Apple has full time experts who choose the best apps. Prabhu Ram told about the software and the app that the app is checked on the app’s app store before it is published, whereas this is not the case with Android. In this case, the probability of reaching malware in Android phone is more than that of iPhone. 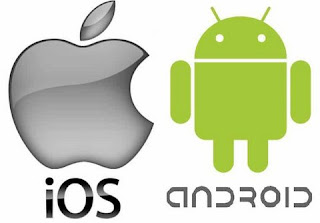 Privacy and Security
Talking about the privacy and security of the smartphone and there is no discussion of the iPhone, it is not possible. You can get a sense of how serious Apple is about the privacy of its users. In 2016, Syed Farooq, a Pakistani-origin terrorist, carried out the firing incident in California, in which 14 people lost their lives. After the incident, the terrorist’s iPhone was handpicked by the US intelligence agency FBI, which the agency had sought help from Apple to unlock, but Apple refused to unlock the iPhone. Apple had said that it would not compromise the privacy of users.
So Apple’s security is much higher than Android. There have been reports of opening the Face ID of many Android phones through photos, but this is not the case with the iPhone. Apple has now eliminated Face ID in iPhone and has given Face ID which is quite fast and secure. Regarding the security of iPhone, Prabhu Ram said, ‘Apple has all the control from software to app. Security and privacy are the two major aspects of any mobile. Apple does not compromise on data security. Apple has special architectures for privacy and security.
How much difference between Android and iPhone security?
Prabhu Ram said about the difference between the security of Android and iPhone, ‘Android is quite open and flexible compared to iPhone’s iOS, which gives many benefits to developers and users, but when a malware reaches the phone If this happens, Android becomes weak, because when Apple releases an update, it gets immediately to the users, while Android update is not immediately available to the users. It is available because all Android mobile manufacturers provide custom user interfaces (their own UI) in their phones. In such a situation, even after releasing the update by Google, users are not able to get the update quickly. There are millions of Android mobiles that have not received new updates. ‘
What is the risk of virus getting into iPhone?
On the question of any malware coming into the iPhone, Prabhu Ram says that the security of the iPhone is like a closed garden with strong walls around it. These walls are between apps and operating systems. Apple scrutinizes all types of third party apps closely and only then the app is published on Apple’s app store. In such a situation, the possibility of malware reaching an iPhone is zero.

One thought on “Android or iOS – which mobile platform is better and safer according to Privacy and Security?”