Nov 6, 2019
Loading...
USNMix Report: Like Samsung and Xiaomi, Apple is bringing a twisted iPhone,
these special features will be available.
When Korea’s smartphone maker Samsung introduced the first foldable phone, all the companies have been preparing to launch such phones since then. In this episode, now the US tech company Apple is also going to introduce foldable smartphone in the tech market. According to the leaked report, the company will give a wrap-around screen in its folded phone, whose display will be wrapped on both sides of the phone. At the same time, the phone’s screen will remain fully active on both sides i.e. back and front. At the moment, the price, launching and specification of Apple’s folded iPhone is not known.
Apple patented file
According to other reports, Apple has filed a patent for its first foldable phone. Also, in this patent, the foldable iPhone has been named Electronic with Wrap-Around. With this technology, users will be able to use the phone’s display from both sides. 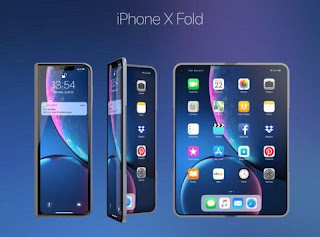 Potential specification of Apple foldable phone
If sources are to be believed, Apple will give the screen on both sides of its leading phone. Also, users will get the support of pressure sensitive virtual buttons instead of physical buttons. Apart from this, users will be able to see information like the network bar and battery level on the side of the device. At the same time, the company can also offer AI based accidental touch detection feature to improve the phone.
Xiaomi Mi Mix Alpha
In the past, companies such as Microsoft and Xiaomi have introduced several concept models on devices that include the Surface Duo and Mi Mix Alpha. Talking about the features of Mi Mix, the company has given screens on both sides of the phone. With this, users will get a straightforward camera setup. At the moment, the company has not shared official information about the launch of this phone.
Microsoft duo foldable phone
The company introduced this phone in early October. Talking about the features, users will get two 5.6-inch displays in this phone, which turn like a book. But the company has not given any information about the price of this phone.