May 24, 2019
Loading...
USNMix Report: The winner of social media emerged
as a watchman ‘Chowkidar’
The Bhartiya Janata Party (BJP), led by Prime Minister Narendra Modi, is heading back to form government again on Thursday and it has also played a role in social media and traditional media in this victory where the BJP has more organized methods than its rivals to its target audience. Has been successful in reaching out. The BJP’s efficient social media system was activated several months ago and it soon achieved the highest rating on print, television and social media networks.
Congress’s campaign failed to put an impact on the public
The party resorted to attractive radio jingles to convey its message to the maximum voters, who continued on FM channels across the country. The charming catch line of the BJP’s ‘Once Again, Modi Government’, ‘It’s possible’, ‘I am also a Chowkidar’ and ‘Come on, Modi Modi’ is popular in every age group. The party’s ‘Chowkidar’ also was unmistakably successful on social media platforms, while the ‘Chowkidar chor hai’ campaign of the Congress failed to give any impact. 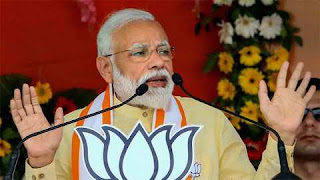 I was also impressed with the Chowkidar campaign
According to a survey conducted by Noida leading marketing company Bujoka, where 54 percent of the top digital media analysts of the country believed that I was also impressive with the ‘Chowkidar’ campaign, 65 percent of the respondents believed that the watchman thief (Chowkidar chor Hai) was a mistake. About 91 percent of the people admitted that digital media is effective in influencing voters in the country and Prime Minister Narendra Modi and his party are the most active leaders and party on social media.
All made the radio jingles accessible
As a medium, the radio made remarkable progress in political advertisements and the BJP made its mark on all radio jingles. According to TAM ADEx, a part of TAM Media Research, the BJP gave political advertisements on the radio with an 88 percent stake in the March. In the case of publicity on social media, the BJP had already surpassed the other parties.
In relation to posting political advertisements on Facebook, political parties paid a total of Rs 27.73 crore, in which the BJP was at the forefront. On Facebook, the BJP paid Rs 4 crore advertisements alone, which was 200 percent more than Congress’s 1.8 crore. The number of Modi followers on Twitter is 4.63 million, while Rahul’s follow up is more than 88 lakhs. Not only Twitter, Modi has 4.3 Crore followers on Facebook, while Rahul has only 25 lakh followers. More than one crore people have downloaded the ‘Narendra Modi’ app.