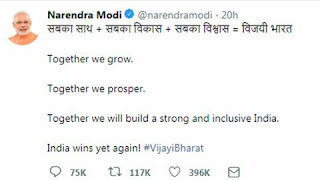 32 Crore tweets were sent on May 23
32 Crore tweets were sent on May 23 during counting. It is interesting that one-third of these tweets were made during the three to four o’clock while Prime Minister Narendra Modi made a tweet on his victory. Modi tweeted, “With everyone, everyone’s development + everyone’s confidence = victory is India.”
Tweet gets 4 lakh likes so far
Modi’s tweet was re-tweeted more than one lakh times, with about 4 lakhs of votes found on it. “In the Lok Sabha election 2019, there were 39.6 Crore tweets from candidates, political parties, citizens and media, from January 1, 2019 to May 23, 2019,” Twitter said in the statement.