Mar 6, 2019
USNMix Report: The ICF recorded the world record by surpassing China,
Train-18 built in this factory.
The ICF has built India’s fastest train-18. It currently operates on Delhi and Varanasi routes known as Vande Bharat Express.
Indian Rail Integral Coach Factory (ICF) has prepared 301 coaches in February. Senior railway officials claimed this on Wednesday. He said that from this, the total production till date so far reached 2,919 coaches and in addition the ICF joined the largest companies in the world making rail compartments. Sources say that the biggest company in China’s rail compartment produces about 2,600 coaches per year. 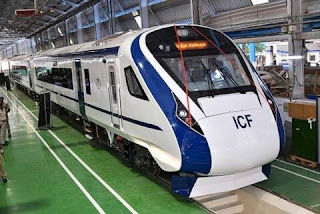 The ICF itself has created India’s fastest Vande Bharat Express, also known as Train-18. ICF-made coach is running in Sri Lanka. Many other countries of the world have also expressed the desire to buy coaches from ICF and Train 18.
Officials said that Chennai-based ICF has prepared 2,919 coaches in the current financial year till February, which is 40% higher than the 2,085 to the same period last fiscal. ICF had created 1,976 coaches in 2017 A senior official said, “The rate at which the ICF is preparing the coaches, by the end of this financial year it will prepare more than 3,200 coaches. It decisively makes a company better than the world’s top rail composting company and the combined capacity of five other domestic companies.”
The ICF has prepared India’s fastest train vane. Indian Railways has contracted to build 44 more fenced India. They will be prepared in a phased manner in the next three financial years. He said that the Modern Coach Factory in Rae Bareli has prepared 143 coaches in February. With this, its total production reached 1,283 in the current financial year till February. This is 118% higher than the 586 coaches of the same period last financial year.