Complain can register DOT against abusive and objectionable messages on WhatsApp

Feb 24, 2019
Loading...
USNMix Report: If you are harassed and threatened with WhatsApp messages
then here is the complaint.
Take the screen shot of the message that has come up and mail it to the ID below.
If you are troubled by the abusive and objectionable messages found on WhatsApp, then there is no need to worry. You can file a complaint with the Department of Telecommunications (DOT) and the department will send it to the telecommunications service providers and the police for further action. An official said on Friday that now people can register their complaints against the objectionable messages received on WhatsApp. For this, the victim will have to e-mail LINK by taking a screenshot of the message with the mobile number. 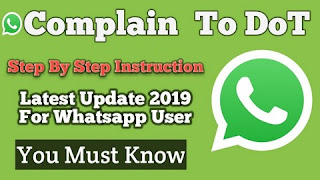 Ashish Joshi, Communications Manager (Controller Communications) of the Department of Telecommunications, said in the tweet, “If anyone gets threatening / obscene / threatening threats to anyone, then with the mobile number, the screenshot of the message will be called the above email address, he said,” We will keep it in front of telecom service providers and police officials for necessary action. “The popular celebrities, including many journalists, had complained about receiving indecent and threatening messages, after which this step has been taken.
DOT had said in an order on February 19 that the terms of the license restrict the sending of wrong messages in the offensive, obscene, unauthorized or any other form of the network. The order has been instructed to take immediate action on the customers who send wrong messages to all telecom service providers as this is a violation of the customer declaration made in the customer application form.