Skip to content
Loading...
USNMix Report: Crisis continues on Jet Airways,
23 planes standing due to non-payment of revenue.
About 20 per cent of the Jet Airways fleet is out of operation.
Jet Airways, a financial crisis-hit airline, has made two more aircrafts due to lack of rent. Due to not being able to pay the rent, the company has so far made 23 aircraft. With the stand of these two planes, nearly 20 per cent of the Jet Airways fleet have been out of operation. The company said in a notification given to the stock exchanges on Saturday, “Two more aircraft had to be set up because of leasing agreement, due to non-payment of leasing companies.” 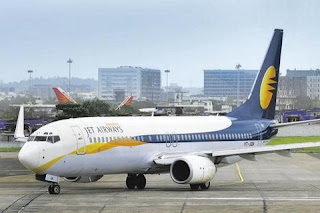 The company also said that “negotiation” is being actively engaged with all the air charter companies and regular information is being given about the steps being taken to improve cash situation. Jet Airways said that due to the standing of these aircraft, all the efforts are being made to minimize the problems faced by the network and the passengers are being informed about this.
Apart from this, the company is also giving regular information to Directorate General of Civil Aviation in this regard. Earlier, Jet Airways had made seven and six aircraft respectively on February 27 and February 28 due to non-payment of rent. The company is negotiating with investing additional capital from its affiliate Etihad.

Samsung Galaxy A21s may launch in Indian market next week