cVIGIL app for violation of model code of conduct

Apr 1, 2019
Loading...
USNMix Report: Make complaint for the rigging of elections will be done on this app,
the complaint will be prompt.
Agitations have become sharper for the Lok Sabha elections. The turnout of the first phase, which begins on April 11, will be concluded on May 19. Elections will be completed in 7 phases across the country. In such a situation, if you see violation of the Code of Conduct around you, then you can become the eye of the administration by giving information to the administration. And report the matter with pictures. If you also want to give such information to the administration, then follow the process forwarded.
Such a download app
– First go to Google Play store in your mobile.
– Search the app called cVigil in the Play Store and install it in the phone.
– This app has different options for sharing both photos and videos.
– If you also have a video or photo that appears in violation of the Code of Conduct, then upload it to this app. 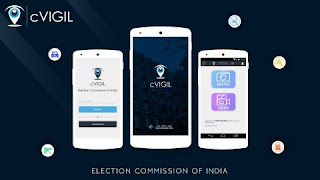 This is a violation of code of conduct
If the candidate contesting the elections shares liquor or money. Or if you have any objectionable poster or banner in your Lok Sabha constituency, you can upload such photos or videos to the app. The app makers have been claiming that action will be taken against the candidate violating code of conduct within 100 minutes of user complaint.
The service started on 12th March is getting good response. It can be estimated from this that 45 complaints have been received so far on this app in South Delhi DM Office. When uploading photos or videos to this app, users should note that photos or videos are not more than 5 minutes old. Old photos and videos are not valid.