DCC fines on Airtel Vodafone Idea on the complaint of Jio

Feb 25, 2019
Loading...
USNMix Report: On the complaint of Jio, Vodafone, Idea and Airtel
on Decision over penalty of 3050 crores.
Airtel and Vodafone have a fine of Rs 1,050-1,050 crores.
Digital Communications Commission on Thursday put an end to the decision on the fine of Rs 3,050 crore on Airtel, Vodafone and Idea till next meeting. The official sources told this information. DCC was first known as Telecom Commission. Telecommunication Regulator TRAI had recommended a penalty of Rs 3,050 crore jointly on Airtel, Vodafone and Idea in October 2016. This penalty was imposed on Reliance Jio for not providing a call connection (interconnection). 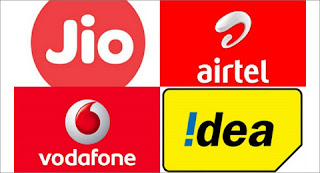 An official source told PTI on Thursday, “The decision to impose a penalty of Rs 3,050 crore on Airtel, Vodafone and Idea has been postponed till the next meeting.” Penalties for Airtel and Vodafone where Rs 1,050-1,050 crore That is, at Idea Cellular, it is 950 crores. The Telecom Regulatory Authority of India (TRAI) had recommended imposing penalty on the complaint of Reliance Jio. Reliance Jio said in his charge that 75 percent of its network of calls is not being completed due to which adequate call combinations (abdicate call combinations) are not available.
On the other hand, the influence of Reliance Jio is increasingly growing. According to TRAI’s report, Jio added 85 million new users in December. The number of its total users has reached 28 crores. On the other hand, the number of users of Vodafone and Airtel are continuously decreasing. At the same time, Jio remains top of the 4G network. In the month of January, he was at the forefront of the download speed.