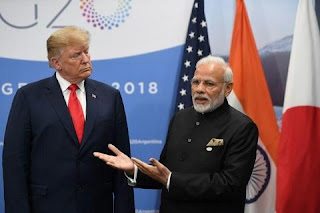 A US official said on condition of anonymity, “After the talks with Indian counterparts for the last one year, in March we had to declare that India should now be deprived of the benefits under GSP. “He said,” The suspension is now fixed. Now the work is how we move forward, how do we get to work with Narendra Modi’s second government to find a way forward?
The Generalized System of Preferences (GSP) is America’s oldest and largest Generalized System of Preferences treatment to other countries. Under this, countries granted to countries are exempted to export thousands of goods at no charge to the US. India was the biggest beneficiary of the GSP program in 2017. In the year 2017, India exported US $ 5.7 billion under this.

China delegation will go to US despite Trumps threat