Mar 12, 2019
Loading...
USNMix Report: Donald Trump said,
why did Tim Cook say ‘Tim Apple’.
Donald Trump had called earlier, Amazon’s chief Jeff Bezos as ‘Jeff Bozo’ and Lockheed Martin’s CEO Marilyn Hesson as ‘Marilyn Lockheed’.
US President Donald Trump has cleared Apple’s CEO Tim Cook to say ‘Tim Apple’. He said in his defense that I did this to save time and words. In fact, while addressing industrialists in the ‘American Workforce Policy Advisory Board Meetings’, Trump praised Cook for investing heavily in the US. During the compliment, he called Tim Cook “Tim Apple”. After this Team Cook changed his name to Tim Apple on his Twitter handle. Social media users have enjoyed this story very well. 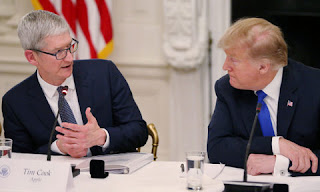 Trump said in a tweet on Monday, “Recently, in the Round Table Meeting of the industrialists, I addressed Apple’s Tim Cook as Tim + Apple or Tim / Apple, this is an easy way to save time and words. The fake news was neglectful and it became another bad story of Trump!
Following Trump’s speech, Tim Cook has changed his name on Twitter. He has replaced Apple’s Emoji instead of the last word ‘Cook’ in his name. This is Apple’s logo.
It is noteworthy that Trump is known for nickname and ‘pronouncing the wrong name’. He called Jeff Bezos of Amazon “Jeff Bozo” and Lockheed Martin’s CEO Marilyn Hesson as “Marilyn Lockheed”.