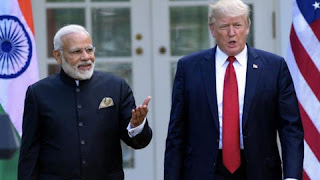 What is GSP status?
The country which gets the GSP status exports the thousands of goods to the United States without paying taxes. In such a situation, India will have to pay taxes on whatever goods the United States exports. Due to tax repayment, India’s goods will become expensive in the US and this will have an impact on its sales. India’s exports can be gradually reduced if India’s goods get expensive. The export is not good for the economy, because India is already struggling with trade deficit. Trade deficit means when a country’s export is lower than its imports. India was the biggest beneficiary of the GSP program in 2017. In the year 2017, India exported US $ 5.7 billion under this.
What is the advantage of GSP status?
A country with GSP status can sell about 2000 garbage tax free in the US. It also includes automobile spare parts.
Donald Trump said that India has not given America equal opportunities to do business in their market. In this way, India does not have any reason to continue with GSP status. Many US lawmakers have urged President Trump to not take this decision against India. But, they did not listen to anyone.