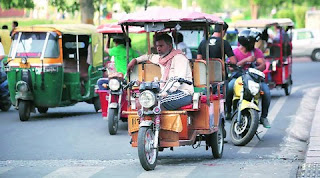 In the report titled ‘Meet the Electric Vehicle Aspiration of India by Electrification of Public Transportation’, it has been said that the Government will play a major role in creating an environment suitable for the success of electric vehicles in the country. However, he may not consider taking a full risk at the beginning. The report said that the government should play a role of facilitator by providing assistance such as subsidizing and developing policy frameworks.
Emphasizing the importance of e-rickshaw or battery powered vehicles in the context of India, the report states that the urban transport system is an important vehicle providing the convenience of traffic on the first and the last ends on the main roads in general. Electrification of auto-rickshaws can be a good solution for these cities or areas … due to the low cost of e-rickshaw, this facility is like achieving the achievement without taking much effort in adopting electric vehicles.