Energy to small appliances from the heat of the body

Jan 24, 2019
Loading...
USNMix Report: Scientists made such cloth,
which will give energy to small appliances from the heat of the body.
Researchers said that in some studies, it was found that any person working for up to eight hours could take some energy from the body.
The fastest extension technology in the modern times is happening, hardly any other thing is developing. Today you will be surprised to know which new wonders are happening in the world of science today. Now scientists have developed a garment that can give energy to your body heat, or to charge small electronic devices such as activity trackers, or charging them. 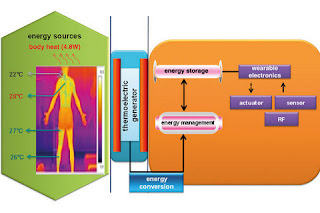 In America, Trisha Andrew of Massachusetts Amherst University said that many bio-sensors, data transmitters and similar devices to be worn were designed in a constructive way to monitor health. He said that although they require a lot of energy and the energy or charging devices can be heavy. This study, published in Magazine Advanced Materials Technologies, has been told that by taking advantage of the difference between body heat and ambient cooler air, energy from the body can be generated which we can use to charge this type of fabric.
Researchers said that in some studies, it was found that a person’s energy working for up to eight hours can be taken from some energy, but the special item required for it is either very expensive, poisonous or not as effective. Andrew said, “In this way, we made cotton cloth with cheap vaporized print bio-friendly, flexible and light polymer film with adequate thermal power characteristics. This cloth will be enough to give energy to a small device. “