Feb 25, 2019
Loading...
USNMix Report: Environment friendly buses,
more comfort in lower fares in Indore.
It will run just 10 times less expensive than the running buses.
The municipal corporation has taken a big initiative to stop the environmental pollution caused by vehicles in the most clean city of Indore. Now the environment-friendly electric bus runs in Indore. In the case of cleanliness across the country, two times the flag carrier Indore is known for its separation and environmental love. This time, the Indore Municipal Corporation is going to introduce the initiative of cheap travel with the environmental lover initiative. Indore Municipal Corporation has planned to run 40 electric buses in the city. 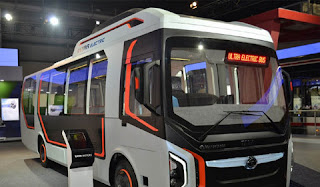 An electric bus has been purchased for this. This is very safe in terms of security. The cameras are on the bus. The LED is also in the camera. This bus is very smooth running and is also very comfortable for the passengers. It will run just 10 times less than the current buses.
In order to charge the electric bus once, the power consumption of 550 rupees will be in which it runs 150 kilometers. At the same time, diesel bus consumes 75 liters of diesel to run 150 km. It is clear that saving of fuel will also reduce the burden on passenger pockets from the cheaply rented bus. This bus will reduce pollution in the environment. To charge the bus across the city, more than 40 chargers are being installed. The price of this bus is 90 lakh rupees.
There is a huge problem of pollution in front of the world. In this case, alternative sources of fuel are being considered. The need for the timing of the electric car is required. In such a way, the initiative of Indore Municipal Corporation is truly commendable. Now in other cities like Indore should be implemented as well and the environment can be saved.