Oct 23, 2019
Loading...
USNMix Report: Facebook’s digital currency Libra will come soon,
earning opportunity.
Social media platform Facebook recently announced the launch of its digital currency Libra. Facebook claims that the Libra will not only be used globally but, it will give a boost to e-commerce and will also get more earning opportunities through advertisements. Facebook has partnered with 28 companies including PayPal, Uber, Spotify, Vodafone for digital currency Libra.
Facebook also prepared the governing body of currency
Facobook is continuously working to launch Libra. Facebook has also prepared the governing body of the currency and has formed a council for this. The official names of 21 members of the Libra Association were officially signed for the Libra. The Libra Association said that in addition to 21 companies for digital currency, 180 other firms and companies have also shown interest in it. 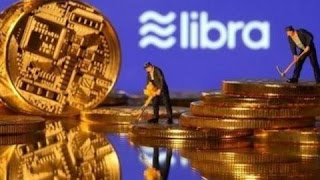 All information will be safe
At present, Facebook is going through a legal process regarding its privacy. Facebook, which is already facing the controversies of data privacy, is going to create currency due to which the privacy of bank, national currency and users can be threatened. Although Facebook says that it will protect all the information related to the bank details and payment of the user. Facebook says that their digital currency Libra will work on blockchain technology. Through this, people will be able to transact money, make money transactions easily.
Common man will also use Libra
Facebook says that blockchain technology will be released to the general public by next year. Blockchain can be used on all platforms of Facebook Messenger, WhatsApp and Instagram. The user’s data will be safe in this.
Advantage of Libra
– Money can be transacted on Facebook Messenger and WhatsApp.
– Digital currency transactions can be tracked through digital wallet app.
– There will be no extra charge on the transaction of digital currency.
– As cryptocurrency people will be able to buy and sell Libra.
– It will also be able to exchange with traditional currency like rupee, dollar.
Digital currency
Digital currency itself is called cryptocurrency. You cannot see or touch this currency like rupee or dollar. Cryptocurrency is not printed. It is a virtual currency that can only be felt and can be used for transactions. It is an independent currency. No government or bank owns it. However, it can be used to buy and sell goods or services.
Ban is in India
Some time ago cryptocurrency bitcoin came in quite a lot of discussion. It is not discussed in India because the Reserve Bank of India has banned cryptocurrencies. According to the proposal of the ban on crypto currency and the draft of the official Digital Currency Bill, 2019, those who buy and sell cryptocurrencies in the country will get a 10-year prison sentence.