Loading...
USNMix Report: Facebook employees say they are ashamed
for not doing Donald Trump’s fact check.
Facebook checked Trump’s tweet that was fact-checked. Staff dissatisfaction with Mark Zuckerberg’s decision. Facebook employees boycott virtual.
Facebook employees have strongly criticized the company’s decision not to remove President Trump’s controversial post. President Trump did this post last week. Trump also posted a tweet on Facebook of demonstrations in Minneapolis over the death of George Floyd in police custody. Twitter has issued a warning on Trump’s tweet. Twitter says it glorifies violence while Facebook’s opinion that the post does not violate company policy, but some Facebook employees have said they are ’embarrassed’ at it.
Trump said – will deploy the National Guard
President Trump said he would “deploy the National Guard” to overcome violence, and also warned that “when the loot begins, the shooting will begin.” After Facebook founder Mark Zuckerberg said that Trump’s post did not violate the company’s policy of inciting violence, the post was abandoned. On Tuesday, employees in Facebook’s office also performed a “virtual boycott”, with some staff leaving messages stating that they were protesting and therefore shutting down work. 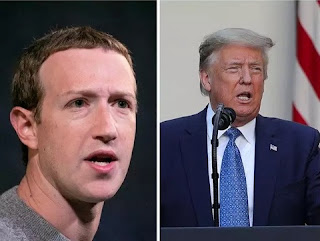 Zuckerberg said – where should we draw the Lakshman Rekha
Mark Zuckerberg wrote, “People can agree or disagree on where we should draw this Laxman line, but I hope they understand our philosophy that it is better to leave the issue for open debate, especially when very Some are at stake. ” “The way President Trump spoke about this, I completely disagree with this, but I agree that this should remain in the eyes of the people because ultimately the responsibility of the people in power can be fixed only. Whereas his words are debated in public. “
Facebook employee said – we are ashamed
Many Facebook employees have expressed their displeasure at Facebook’s decision not to take any action. Lauren Tan, a software engineer, has said, “Facebook is silent about the removal of Trump’s posts that incite violence, I’m ashamed that I work here.” “I do not agree with this at all. Doing nothing is the same as your consent.” However, many people say that social media should have changed its policy in view of the current situation.
David Gillis, director of product design at Facebook, says, “As a company, we try to raise the morale of black peers working with us to combat the violence and adverse conditions in society.” They should not be alone. ” According to The Verge, many workers also expressed displeasure over the company’s decision by using Facebook’s messaging system.
Facebook said it “has an idea” of how many employees are feeling at the moment. A company spokesperson said that “In cases of resentment by top executives of the company, we encourage employees to keep their views open. In the future, we will face a difficult situation regarding our content but we will keep asking for honest feedback.”
Facebook will give one crore dollars to end the injustice caused by racism
Enders Analysis’s tech head Joseph Evans said that “this is not the first time that employees of tech companies have raised their voice against their company, it has happened before. In 2018, Google’s employees about the company’s attitude with women Had done a walkout. Those who work for these companies are said to be working for a better world and they believe in it. “
“In such a situation, technology companies have to keep trying to avoid the action of regulators, to maintain their profits and to retain good employees.” Donald Trump and Mark Zuckerberg spoke on the phone on Friday. There is no information about what happened between the two, but according to the Axios news website, both of them described the discussion as positive.
Today Facebook has announced a donation of one million dollars “to end the injustice caused by racism”. On social media, the company said, “We are listening to your voice, we are watching you and we are with you.” “We are against racism. We are with the Black community and George Floyd, Bryan Taylor, Ahmed Aubrey and all others working in this fight for justice. Although it is not clear yet how much of this one million dollars How and where expenses will be incurred.