Jun 6, 2019
Loading...
USNMix Report: The issue of data security raised
in the Facebook annual meeting.
In the annual meeting, the Facebook developers said that they are working to bring the interoperability between Messenger, Instagram and Whatsapp. Chief Technical Officer said that our focus remains on data security.
A senior Facebook official has said that the main focus of the social media company is to keep control of the users’ data with them. Along with this, the company is working to facilitate connecting between accounts of various forums such as Messenger, Instagram and WhatsApp, without any difficulty. Facebook had announced in the annual developer’s meeting ‘F8’ that it is working towards bringing interoperability between three forums. 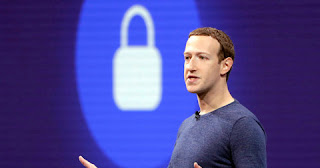 Facebook’s Chief Technology Officer (CTO) Mike Schroepfer said, “I want to be connected to my friends on these forums but I want to control (on data) … we are working in this direction.”
He said that Facebook has started a discussion in this matter so that it can talk with governments and security experts on issues like encryption and security before its designing. Schroepfer said that while creating the products, the focus of the company is on the security of most users’ data.