Skip to content
Loading...
USNMix Report: It will be difficult to make Facebook Live,
Facebook changes the rule.
Social networking site Facebook is going to harden the rules of live video streaming service than before.
Facebook has said that it is tightening the rules in view of the use of its live video service to air the attack on mosques in New Zealand. In the past, an attacker attacked two mosques in Christchurch, in which about 50 people died. 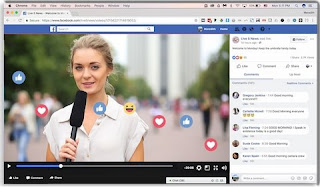 Facebook taking action against terrorist attack
Facebook Chief Operating Officer Sheryl Sandberg said in an online post that many people raised the right question that how to use online platform like Facebook to spread the horrific video of the attack. He said, “We are taking three steps in the wake of the terrorist attack: Facebook is tightening the rules of using Live, taking more steps to stop spreading hatred on our platform and supporting New Zealand community. ‘
According to Sendberg report, Facebook is considering preventing the use of this service for people who have previously violated their live streaming criteria. Social networks are also investing in software that can identify them instantly to prevent violent video or the edited version of photos from sharing or re-posting.