Feb 26, 2019
Loading...
USNMix Report: New e-commerce policy ready,
Amazon and Flipkart welcome this.
Flipkart said that we appreciate the fact that opinions have been sought about the new policy.
Major e-commerce companies Amazon and Walmart supported Flipkart said on Saturday that they are reviewing the draft of the national e-commerce policy and will hold their views on the proposals soon. Government released a new national e-commerce policy draft on Saturday. In this, a series of conditions have been made to create a legal and technical framework to stop cross-border data flows and to keep sensitive data for companies locally stored, processing and keeping them in other countries. 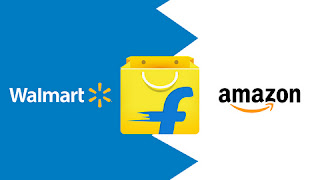 A spokesperson of Flipkart said, “We appreciate the fact that the government has sought the opinion of the draft e-commerce policy, we are looking at the draft, which has been issued for suggestions just a while ago. We will soon put our point of view.The flipkart set up in India is leading the progress of the industry, we are keen to work together with the government and other parties for the development of this new area … ” Amazon India In his response to the email, the company said that the company is now studying the policy draft.
The statement said, “We will keep our point in the time given for the response of the people. We want a policy that allows us to serve our more than four and a half million vendors, our logistic network can not be developed, new To create jobs, to give digital payouts and to satisfy their customers. ” This 42 page draft included six broad topics of e-commerce system – data, infrastructure development, e-commerce platform, regulatory issues, encouraging domestic digital economy and promoting export activities through e-commerce. has gone.
It has been said in the draft titled “National e-commerce policy- Indian data for the development of India”: “In today’s time, it has become a common belief that data is a new fuel. It is in the country without any interference. It can be preserved in a foreign country or it can be processed and can keep all the important processing information.
Therefore, the use of India’s data should be used in the development of the country and Indian citizens and companies should get the financial benefits of monetization of data. “A Snapdeal spokesperson has said that making national policy on e-commerce is a welcome move, A favorable environment for India’s rapidly growing digital economy will be ready.