Nov 29, 2019
Loading...
USNMix Report: Gold Paying feature coming in Google Pay,
learn about it.
Earlier this year, Google announced that gold could be bought and sold through the Google Pay app. For this, Google partnered with international metal and mining service provider MMTC-PAMP.
At the same time, there is news that the company is also offering the feature of gold gift in Google Pay app. For example, you can gift gold to someone on a special occasion. 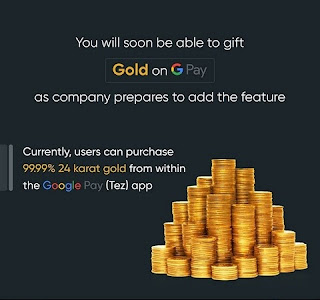 According to a report by XDA Developers, this gold gifting feature has been seen on Google Pay v48.0.001_RC03 version, although this feature is currently in the test. It will be released to everyone after the test is successful. At the same time, Google has not confirmed about this feature. Also, there is no information about the release date of this feature.
In April this year, Google gave the feature of buying and selling gold in Google Pay. Google Pay users can buy and sell 99.99 percent 24 carat gold. According to Google, gold is kept under the supervision of MMTC-PAMP in Secure Vaults. The price of gold in Google Pay is refreshed every minute. In such a situation, anyone can buy and sell gold at any time.