This app will do the job.
After promoting the use of smartphones in rural India, the largest search engine, Google will increase the ability of children to read. For this, Google has launched the new app ‘Bolo’ on Wednesday. This app will help the children of primary school learn Hindi and English. On behalf of the company it was said that this app is based on voice recognition technology and text-to-speech technology. This app is first launched in India.
‘Diya’ will encourage stories to read
From the company told that an animated character has been given in it, which encourages children to read stories. It helps the children when they have trouble pronouncing a word correctly. It also enhances the morale of the children upon completing this story. Google India product manager Nitin Kashyap said, “We have designed this app in such a way that it can work offline too.” 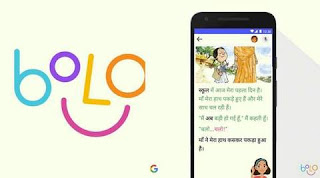 Approximately 100 stories of Hindi and English in the app
If you also want to use this app for your child, then this app will have to install 50 MB. In this, about 100 stories of Hindi and English have been given. He said that the app is available free on the Google Play Store. It can run on all devices with Android 4.4 (KitKat) and above.
Kashyap said that Google has tested this app in about 200 villages of Uttar Pradesh. He said that this app was introduced after the best results came. He said that inclusion of other Indian languages like Bengali is also being considered in the app.