Skip to content
Loading...
USNMix Report: Google’s big blow to Huawei after the US,
Google Canceled Huawei Android license.
Huawei Android License Cancelled, After blacklisting China’s giant tech company Huawei on behalf of the US, Google has also taken stern steps against Huawei. Google has canceled Android license issued for Huawei while suspending its business with the company. After this step Google will not provide Huawei with its hardware, software and technical service. That is, Huawei will not even get Google Android updates. Apart from this, the US has demanded the Chinese company Huawei to be blacklisted around the world.
Tensions between China and America may increase
After taking strong action against Huawei from Google and after the trade war between China and the US, tensions can increase in both the countries. The biggest question among all this is what will happen to Huawei users when Google has canceled its Android license. Huawei Smartphone users will no longer get Android updates on their phones. According to a Bloomberg report, chip companies such as Intel, Qualcomm have suspended their business with Huawei. After this strong move from Google, Huawei will have a direct impact on the Smartphone business outside of China. 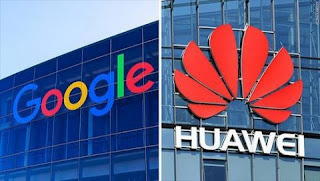 We will reduce the dependency on US components
Before the cancellation of Huawei’s Android license from Google, the Founder of Huawei had said that his company is ready to deal with the steps taken by the US. At the same time, he said that Huawei will reduce its dependence on the parts of America.
Let us tell you the President of America Donald Trump has effectively ban Huwai from the US market last week. Huawei founder and CEO Ren Zhengfei said in an interview with Japanese journalists on Saturday, “We are already preparing for its preparations.”
Huawei will continue development of its own spare parts
Ren said that Huawei would continue to develop its parts so that its dependence on outside suppliers could be reduced. Huawei is one of the leading companies in 5G technology, but is still dependent on foreign suppliers for many parts. According to Nikkei Business Daily, Company buys spare parts of the Smartphone for $ 67 billion every year. Of these, about $ 11 billion is supplied by American companies.