Oct 7, 2019
Loading...
USNMix Report: Google 21st Birthday:
Google made the Great Doodle on Birthday
Today is Google’s 21st birthday dedicated to doodles for people who are contributing to the country and the world. Doodle is specially designed for this occasion. A doodle made on Google Birthday shows a desktop. The mouse, keyboard, printer and CPU are also visible in the doodle. It is dated 27th September 1998. The Google page is displayed in the desktop as well as the search page. Clicking on the doodle created on Google Birthday will give you all the information associated with Google.
Google has become the largest platform as a search engine
21 years ago today, in 1998, two PhD students at Stanford University, Larry Page and Sergey Brin, created Google. It was previously published under the name BackRub, but was later renamed to Google. Google has become the largest platform as an Internet search engine today. 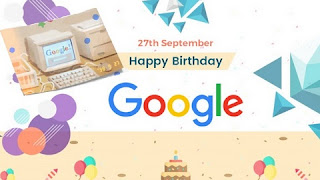 Google’s value is estimated at $ 137 billion
Today Google is operating the search engine in 100 languages worldwide. As of October 2016, Google has 70 offices in 40 countries. Over the past two decades, Google has become a multinational technology company. One year ago Google’s value was estimated at $ 137 billion. Google is constantly expanding. Google.com is ranked by Alexa as the most visited website in the world.
The extent to which Google has accessed your life can be gauged from the fact that almost every person in the world operates Google on their smartphones, laptops or tabs. Not only has the term Google joined the Merriam Webster Collegiate Dictionary and the Oxford English Dictionary. Here it means ‘Use Google search engine to extract information from internet’.