Loading...
USNMix Report: Google’s smartphone Pixel 4
will use radar technology, will work on gestures.
The motion sensing face unlock feature will be completely different from other smartphones. It will unlock as soon as you take the phone in hand.
The world of technology has gone far ahead. In such a situation, Google is bringing the Pixel 4 smartphone which includes the advanced face recognition feature. The company has shared a video on an official Twitter handle. Seeing this 22-second video, it is clear that it is unlocked as soon as we face it in front of the phone. After that you can control it with the movement of the hand. No need to touch the phone to swipe. 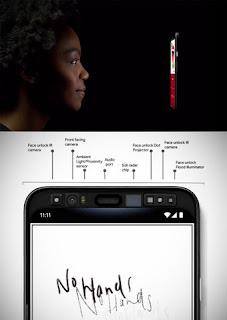 According to information available on Google blog, for the last five years the company was working on motion sensor technology. This technology has been named Soli or Motion Sensing Radar. With the help of this technology, it will be very easy to turn off the songs, turn off the alarm, silent the phone call. There will be no need to touch the phone for these tasks. All these works can be done only by Waving.
Apart from this, Face Unlock feature will be included. The company says that although this is an old feature, but we have used engineering differently in it. One has to wait in front of another smartphone and then the phone is unlocked. It will be unlocked as soon as you take the Pixel 4 phone in hand.
Meanwhile, according to a report by The Verge, Google is taking photos of people by roaming around in American cities and distributing dollars in return. If a person is ready for a facial scan, he gets 5 dollars (about 350 rupees) in return. Earlier, such news has come in the media that people of Google are distributing money by scanning the face by roaming the streets. Confirming this report, it was said from Google that the company has done field research. We want to make the algorithm of face recognition feature more effective, so this type of survey was done.