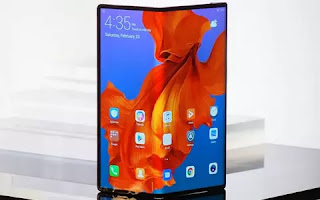 When unfolded, this phone becomes a tablet, whose display is 8 inches. Upon folding it becomes a 6.6-inch smartphone. Like the Samsung, no display of any kind has been given to it. The phone’s 8 GB RAM and 512 GB internal memory variants are worth about Rs 2 lakhs 10 rupees. The sale of this phone will start in the next few months. However, no date has been announced for this. It has been said by the company that it is launching Mate 20X soon, apart from the Foldable, which will be a 5G smartphone.
Specifications
Huawei Mate X is a dual SIM smartphone that works on Android 9 Pie. Its front display is 6.6 inches and the rear display is 6.38 inches. When unfold, it becomes an 8-inch tablet. When unfolding, its thickness remains only 5.4mm, which is less than the thickness of iPad Pro (5.9mm). When folded, its thickness becomes 11mm. This smartphone has a Toon-in-One front camera. Its battery is 4500mAh. With the help of Huawei Super Charge Technology, this smartphone gets 85 percent charge in 30 minutes.
Ballong 5000 5G modem has been given for Hugo Mate X for 5G speeds. On receiving 5G network, this phone phone can download content of 1 GB in 3 seconds.