Feb 16, 2019
USNMix Report: Hyundai launches new service for customers,
this facility will be available sitting at home.
If you have a car of Hyundai Motors then this news is for you. Hyundai launches the Door Step Car Service in the country. This service company has started with the intention of providing better service to the customers. This service of Hyundai will provide door step car service in 475 cities across the country. The company’s after sales service is considered to be one of the best car services in India. In a survey conducted in the year 2017-18, the company was at number one in After Sale Customer Setting. 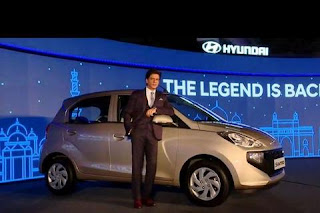 Deployed 500-two-Wheeler for Service
500 two wheelers have been deployed for this service from the company, who will go from house to house to know about customer needs. In the past, the new Centro, which was launched by the company, has left behind cars like Tiogo and Quid, in terms of sales. The new Centro has a 1.1 liter 4-cylinder gasoline engine. It is capable of generating 69 PS power and 99 Nm torque. Centro’s CNG variant generates 58 bhp of power and 84 nm torque.
30 mileage of CNG variant
In the car the company has given the 5-speed manual gear box standard. There is only manual gear box in the CNG variant. The petrol variant of centro gives mileage of 20.3 kilometers per liter. The company claims that the same mileage is available in both manual transmission and AMT. On the other hand, the CNG variants have been claimed by the company for 30.5 kilometers per kilogram mileage.
The top-variant of the car has a 7-inch touchscreen entertainment system, featuring Apple Car Play, Android Auto and Mirror Link. Keeping in mind safety, anti-breaking systems (ABS) and driver air bags in Kahra are given in all variants. There is a passenger air bag with the driver in the car’s top model. The rear AC vent has been given for the comfort of the person sitting in the previous seat. The car has a rear parking camera to park the car without any difficulty.