India going to WTO against US to withdraw import discount

Mar 7, 2019
Loading...
USNMix Report: India will give strong message to the United States,
considering going to WTO for withdrawal of the import exemption.
India exports US $ 5.6 billion worth of goods under GSP.
India is considering various options including challenging it in the World Trade Organization (WTO) to deal with America’s decision to eliminate the benefits of concessional import duty on its 2,000 items. These items from India were entered on the concessional fee of 0-6 percent in the US. Sources said that the government could also choose to give financial support to areas affected by the US decision-making and retaliate duty on US goods.
It is worth noting that on Tuesday, the United States has decided to withdraw the benefit of subsidized import duty to India under the Generalized System of Preferences (GSP) program to prioritize business for the benefit of developing countries. This decision could affect the country’s exports of 5.6 billion dollars Removing profits means that the US will charge a higher fee for 2,000 products, which will not be competitive in the US market in terms of price. 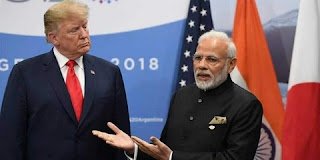 However, another source said that the process can be extended in the WTO process and the best option is to resolve this issue with bilateral talks, because India’s exports to the business with the US are more than imports. Going to India’s WTO Dispute Settlement Body will depend on whether the US, India is not separating and discriminating between the developing countries. India exports US $ 5.6 billion worth of goods under GSP, out of which only $ 1.9 million worth of goods come in the category without any fee.
Earlier, the US President had offered India a major setback to discontinue trade discounts. Trump on Tuesday told the US Congress about abolishing GSP with India. He wrote a letter to the speaker of the American Parliament and said that America will eliminate the status of India’s debt free country. In this order, Trump had said on Saturday that India is a country charging at a high rate.