Nov 24, 2019
Loading...
USNMix Report: Indian Army released advisory,
Army man set this settings immediately in WhatsApp.
The Indian Army has issued an advisory on WhatsApp for all its Jawans. The advisory states that all the soldiers immediately change the settings of their WhatsApp account so that no Pakistani spy can add them to a group. Let us know that recently the WhatsApp number of an Indian Army Jawan was added without permission in a WhatsApp group related to Pakistan. After that the army has taken this decision.
This setting has to be done in WhatsApp account
After the new update, if you want any group administrator not to add you to a group without your permission, then you have to make some settings for this. For this, first update your WhatsApp app. 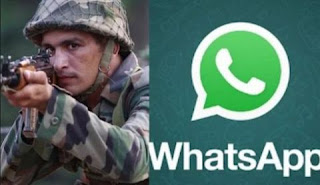 After this, open the app and follow this step. Account> Privacy> Groups After this you will get three options which include Nobody, My Contacts and Everyone. If you select Nobody’s option from these, then you will not be able to add to any group. On the other hand, if you want to add only those people who are in the contact list, then you have to choose the option of My Contacts.
Indian intelligence agency had given instructions earlier
Let us know that earlier in July this year, the Indian intelligence agency had instructed the Indian military officers and their families to be vigilant against any suspected WhatsApp group. On the advice of the intelligence agency, the army has advised its military officers to take special care of it. The army said that officers should not be exposed to privacy and privacy and should not be part of any WhatsApp group that endangers their credibility or leaks information related to the army.