Mar 12, 2019
Loading...
USNMix Report: After Delhi-Varanasi route,
second Train-18 can run on this route, probability of trial this month.
At present Vande Bharat Express runs between Delhi and Varanasi.
The country’s fastest train ‘Vande Bharat Express’ has been successfully running on Delhi and Varanasi routes. There is a crowd of passengers on the train. In this way, pleased with its success, Indian Railways has decided that the second train-18 will be started soon. According to sources, the second train will start operating till March 31. However, there is not enough information right now about which route it will be operated on. There is a possibility that this train will run from Delhi to Bhopal route. Some reports are also being claimed that this train will run between Delhi and Chandigarh. 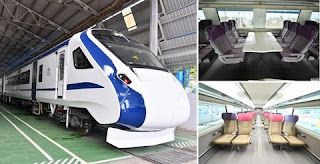 In the past, Railway Minister Piyush Goyal also said that very soon train-18 will be run on the second route of the country. He had said that preparations for issuing tenders for making such 30 more trains are being made. At present, ‘Vande Bharat Express’ is being run on a small route. But, in the coming time, it is planning to run on a long route too.
Since traveling by this train is very expensive, therefore it is expected that this train will run on the routes where the passenger is more and the train is less. It is likely that in the coming time, this train will run from Mumbai to Surat, Bhopal to Indore, Delhi to Chandigarh, Delhi to Amritsar, on the same route.
There was also a lot of complaints about train-18 old coach. IRCTC said that it has given very little space for catering. In such a situation, those shortcomings will be removed in the new coach.