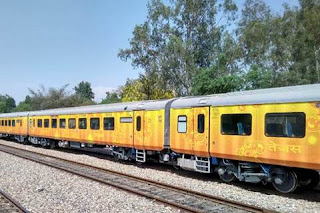 Will leave Lucknow for Delhi on October 4
The train (Private Train Tejas Express) will be flagged off from Lucknow to Delhi on October 4. Sources say that the process of booking tickets will start 15 days before the start of the train operation i.e. around 20 September. The operation of this train will be completely in the hands of IRCTC. IRCTC can later assign the train to a private player. Lucknow – Delhi Tejas Express train will run only 6 days a week. Train will not be operated on Tuesday.
Rent will fluctuate according to demand
Regarding the fare of the train, it is clear that the fares will be dynamic, ie the fares will fluctuate according to the demand. But the air fare on that route will not go above half the fare. IRCTC also plans to have train hostesses on the lines of Air Hostess for the Lucknow-Delhi Tejas Express train. Indian Railways will provide train drivers, guards and RPF security in the IRCTC-run Tejas Express train.
IRCTC will be responsible for ticketing staff, onboard house keeping, catering, for which IRCTC will issue tender and give contract to private company. IRCTC will pay a fixed fee to the Indian Railways in lieu of the Tejas Express train. A final decision has not yet been taken on starting the Tejas Express between Mumbai and Ahmedabad.