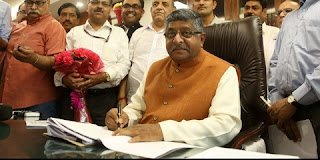 After assuming charge, he also detailed discussion with the heads of the Ministry and the PSUs of the telecom sector. BJP MP Sanjay Dhotre also took charge of the Minister of State for Communication. In the second term of the Narendra Modi government, the responsibility of the Ministry of Telecom has also increased Prasad’s stature. They already have heavy-duty ministers like law and information technology.
The telecom sector is under the pressure of financial pressure, but it also challenges the implementation of 5G services with other countries in the world. In such a situation, Prasad’s top priority will be to take the telecom sector back to the path of growth. Four times Rajya Sabha member, Ravi Shankar Prasad has played an important role in furthering the leading schemes of the Narendra Modi government. Among them, Digital India has been the leader. Along with this, he has taken several initiatives in speeding up electronics and mobile manufacturing in the country.