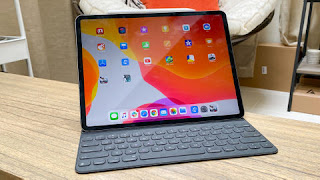 Apple’s new iPad Pro has an ultra wide camera with support for studio quality mic. The iPad will have a 12-megapixel wide-angle and 10-megapixel ultra-wide-angle dual camera setup, allowing you to record 4K videos as well. Apart from this, the iPad has a LiDAR scanner that can measure anything that is 5 meters away from the device.

The new iPad supports iPadOS 13.4. The new iPad will be available in two display sizes, including 11 inches and 12.9 inches. Apart from this, Mac OS has been given in it. Navigation can be used through the trackpad found with the keypad. The trackpad also supports multitouch. The sale of Magic Keyboard will start from May.
On the occasion of the launch of the new iPad, Apple’s Global, Senior President Phil Schiller said, “The iPad Pro is the most advanced device in the world of mobile computing with features such as powerful performance, pro grade camera, pro audio, magic keyboard and lidar scanner. Is equipped with. There is no device in the world like the new iPad Pro. Customers will definitely like it.”
In addition to 4K video editing on the iPad, OctaCore GPU will be available with A12Z. The company has claimed 10 hours of battery backup with the new iPad Pro. For connectivity, it has Wi-Fi 2 and Gigabyte class LTE which is 60% faster than the existing LTE bands. Both the 11-inch and 12.9-inch iPad Pro will be available in Silver and Space Gray color variants. At the same time, the new iPad will get up to 512 GB of storage.
The 11-inch iPad Pro’s Wi-Fi variant has an initial price of Rs 71,900 and the cellular model with Wi-Fi is priced at Rs 85,900. The starting price means 128 GB of storage.
The initial price of the 11-inch iPad Pro’s Wi-Fi model is Rs 89,900 and the cellular model with Wi-Fi is priced at Rs 1,03,900. The price of the Magic Keyboard for the 11-inch iPad is Rs 27,900 and the 12.9-inch Magic Keyboard costs Rs 31,900. The new iPad also has support for pencils, which you can buy for Rs 10,900.