Jul 17, 2019
Loading...
USNMix Report: After the divorce,
World’s richest person reached at Wimbledon Finals with the girlfriend.
Amazon’s founder and CEO Jeff Bezos was seen in the Men’s Singles Final of Wimbledon Tennis with girlfriend Louren Sanchez last week. The relationship between Bezos and former TV anchor Lauren Sanchez was revealed in January this year.

Before this, Bezos divorced his 25-year-old marriage and divorced with Bezos Mackenzie. Bejos and Sanchez were seen together publicly for the first time after the relationship between the two was revealed. After this it is expected that Bezos and Sanchez can live together soon. Wimbledon was sitting on the back seat of both Royal Family members in the finals. 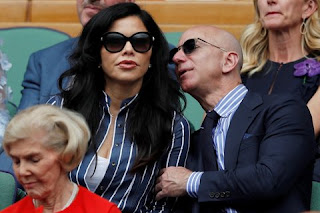 Jeff Bezos is the big fan of tennis

Let’s tell you that Wimbledon’s title match lasted five hours on Sunday between Roger Federer and Novak Djokovic. Sanchez is also divorcing her husband Patrick Whitesell, who applied for the next day after the divorce was decided by Bezos. The world’s richest man Jeff Bezos is a big fan of tennis. In 2001, a charity match has also been opened in partnership with Pete Sampras. They had a pair of Bill Gates and Andre Agassi.
Meet Sanchez and Bezos two years ago
Former TV anchor Sanchez had married Patrick Whitesell 14 years ago. WhiteSell is the CEO of Hollywood Agency WME. Bezos met Sanchez two years ago through Whitesell. After this, the close proximity of Bezos and Sanchez grew. Bezos gave his former wife Bezos Mackenzie 4 percent of Amazon under the settlement. The current price of these shares is 40.5 billion dollars (2.77 lakh crore). After this, he has announced to donate his property.