JIO fastest 4G Network in February compared to other network

Mar 18, 2019
USNMix Report: Jio and Vodafone again fastest in this case,
reveals TRAI.
Reliance Jio was the fastest 4G network in February with an average speed of 20.9 megabit per second. Indian Telecommunication Regulatory Authority (TRAI) gave this information on Friday. Comparison of Bharti Airtel and Vodafone with 9.4 Mbps and 6.7 Mbps compared to January. 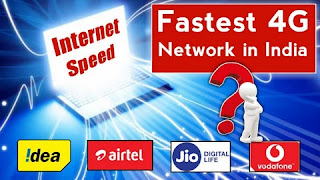 Improved download speed of Idea
In February, the average download speed on Idea network was improved to 5.7 Mbps, which was 5.5 Mbps in January. However, business has been merged with Vodafone and Idea Cellular, and this unit operates under the name of Vodafone Idea, TRAI has published the performance data of both the networks separately.
In terms of average upload speed, Vodafone was the front. Vodafone’s upload speed in February is 6 Mbps. In February it was 5.4 Mbps. Idea and Airtel’s average 4G upload speed declined marginally to 5.6 Mbps and 3.7 Mbps respectively. At the same time, the average upload speed of JIO is 4.5 mbps with slight improvement.