Loading...
USNMix Report: The biggest notice for Reliance JIO subscribers,
free calling service on other networks closed from 10 October.
At present, all the plans of Jio only cost internet data. Calling and message services are completely free. Now the company has decided to limit the free calling service. In the first phase, a charge has been levied to call the second network.
Big news has come for the consumers of Reliance Jio. The company is going to discontinue the facility of free calling completely. Reliance Jio has decided that if a Jio subscriber calls on another network, then he will have to spend money. However, the free service of Jio to Jio calling will continue. In a statement issued by Jio, it has been said that Jio consumers will have to spend 6 paise per minute for making calls on other networks. Free calling services will be closed from October 10. 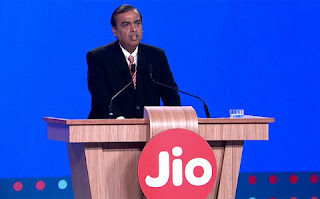 Here, let us tell you that at present, all the plans of Jio only take money for internet data. Calling and message services are completely free. Now the company has decided to limit the free calling service. In the first phase, a charge has been levied to call the second network. That is, Jio consumers will now have to recharge the IUC (Interconnect Usage Charge) top-up separately for making calls on other networks.
Because of this Jio ended free calling service
The Telecom Regulatory Authority of India (TRAI) has fixed the fee for calling from one telecom network to another. At the moment Jio was paying this fee on its own, but now the company has decided to impose this burden on the consumers. This fee to be levied by TRAI is called IUC. For example, if Jio consumers call an Airtel number then Jio has to pay the ICU fixed by Airtel to TRAI. Likewise, when Airtel subscriber calls on Jio, Airtel has to pay ICU to Jio.
In the beginning, there was a balance in the number of consumers of almost all telecom companies of India, due to which if Airtel subscribers make 100 calls on Jio network and same number of Jio consumers on Airtel network, then there was a balance in ICU charge between both companies. At present, this balance has deteriorated, due to which the other company is suffering a lot in filling the ICU charge. Let me tell you here that Vodafone-Idea has a market share of 32.53 percent, Jio has a market share of 29.08 percent and Airtel has 28.12 percent. It is also worth noting here that outgoing calls of JIO users are more.
TRAI had set an ICU of 6 paise per minute in the year 2017. It was also assured that by January 2020 it will be scrapped. Now TRAI has decided not to lift the ICU charge, after which Jio has decided to bear this burden on the consumers.