Skip to content
Loading...
USNMix Report: Movie Review: Madhuri Dixit and Sanjay Dutt have failed in ‘KALANK’,
the pain of splitting pain.
After 20 years, Madhuri Dixit and Sanjay Dutt came back in big-screen as reel couples and it can not be happier for their fans.
Karan Johar’s father’s dream project ‘KALANK’ is a heart-touching romance between the grand sets and the big star-cast. If you are planning to go see the release of this movie today, then first you know what its story is.
Story:
The story of the film begins, Husseinabad (now part of Pakistan) present in India before independence, where Roop (Alia Bhatt) has to marry in the compulsion to marry Dev (Aditya Roy Kapoor). Satya (Sonakshi Sinha), wife of Dev (Aditya Roy Kapoor) is about to die and before that, she wants to come to the life of Dev (Aditya Roy Kapoor). 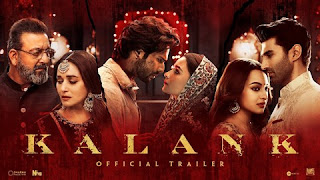 Dev (Aditya Roy Kapoor) loves Satya (Sonakshi Sinha) so much that the form (Alia Bhatt) can not place a place in his life. In the meantime, the form gets Zafar (Varun Dhawan) who lives in Hussainabad’s infamous neighborhood. Zafar (Varun Dhawan) and Roop (Alia Bhatt) are both in love while battling their situation, but only then the situation in the city has been divided into the battle of Hindu-Muslim. It is now to see if the form and the Jupiter can be found, or they will be burnt in the blur of hatred.
Madhuri Dixit and Sanjay Dutt 20 years later
Varun Dhawan, Aaliya Bhatt and Aditya Roy Kapoor’s Love Triangle, another romance story is shown in the film. Outside Begum (Madhuri Dixit) and Balraj Chaudhary (Sanjay Dutt) who got the allegation of illegal love After 20 years, curtains Madhuri Dixit and Sanjay Dutt came back as reel couples and it can not be happier for their fans. Sanjay Dutt fits perfectly in the role of father of two sons, while Madhuri Dixit looks amazing in the role of lover’s infidelity and son’s hatred for son’s hatred.
Varun filled in Zafar’s roll
Varun Dhawan is the life of this movie. In the role of Zafar, the role of a waitress and angry son is fulfilled by Varun. It may be a few minutes from the beginning but you do not like Zafar but when the love and pain in his heart comes in front of you, it is imperative to love Zafar. Alia has once again worked to win the heart in the role of Roop. Aditya Roy Kapoor’s acting is good in the role of Sanjida husband and son. Sonakshi did not have much to do in the role of Satya. At the same time there was no special need for Kiara Adwani’s small roll.
Box office results
According to the news, the total budget of the movie is 80 crores but due to the Lok Sabha elections, the box office has a lot of influence. The love story of the emotional drama and Hindu-Muslim can be successful in winning the hearts of people. The film can do business from 10 to 15 crores on the first day. The music and songs of the film have already been hit, which is beneficial for the film’s release. The length of the film could have been reduced. Apart from this, the film has emotions, dramas, acting, everything is just a screenplay can be tightly tight, which prevents characters from scattering.

AnyDesk App can empty your bank account in minutes