Feb 16, 2019
Loading...
USNMix Report: PM Modi to inaugurate the first installment of the Kisan Yojana
Prime Minister Farmer’s Scheme on this date.
Under this scheme, 12 crore small and marginal farmers having agricultural land upto two hectare will be given 6,000 rupees in three installments in a year.
Prime Minister Narendra Modi will formally inaugurate the Prime Minister-Kisan Yojna of Rs 75,000 crore in Gorakhpur in Uttar Pradesh. Under this, the first installment of Rs. 2000-2000 will be transferred to each of the accounts of about one crore eligible beneficiaries. A senior official of the Ministry of Agriculture has given this information. In the interim budget 2019-20, the Prime Minister Kisan Nishad Nidhi Yojana (PM-Kisan) was announced, under which 12 crore small and marginal farmers having agricultural land up to two hectare would be given Rs 6,000 in three installments in a year. 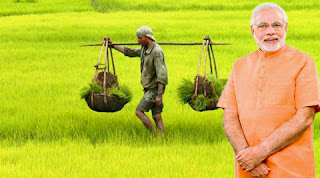 The official told PTI, “Prime Minister Narendra Modi will formally launch this scheme in a farmer rally in Gorakhpur on February 24. We hope that more than one crore beneficiaries will benefit from this.” The official said that on the occasion of the event, the first installment will be released to the eligible farmers uploaded on the Prime Minister-Kisan portal on February 24. He said that the second installment would be given from April 1.
On being asked if the first installment will be given to those farmers whose names are not available in the initial list of eligible beneficiaries, the official said, “The basic principle is that the farmers are not deprived of benefits due to incompetence or incompetence of the system. Will be. ” The official said that in the North-East, a solution is being taken with respect to farmers as well as tribal farmers.
The official said, “In the North-Eastern region, a community chief will give an affidavit that each farmer will have the amount transferred to his bank accounts on the basis of how much land he has.” The government has also made it clear that tribal farmers who have rights to agricultural land in forest areas will also get benefit under this scheme. Regarding the data of the beneficiaries, the official said, “Verification is going on at the grassroots level.” Different states are moving at different speeds, in the context of gathering of data, in some states, administration and political issues are coming up. . “
However, many states have come to upload data on the Prime Minister-Kisan Portal starting on Thursday. For example, the Uttar Pradesh government has a good digital digit of land records of farmers. The official said that after the selection of all the people, about two crore small and marginal farmers of the state will be benefitted from this scheme. He said that 95 percent of the data is ready in almost a dozen states, while 80 percent of the nine states have been completed while the rest are slightly backward.
Referring to the improvement in revenue data base in the country by the new scheme, the official said, “The farmers will be asked to update their land records to get the benefit under the scheme.” He said that small and marginal farmers Feeling empowered. ” Due to this process of selection, people of Bihar and Uttar Pradesh are being empowered. The official said that in the long run, this scheme will solve the problem of abandoning the farming. He said, “At present, about 50 percent of farmers take 2-3 crops in a year and the rest take a crop, so that the farmers will work in their fields.”