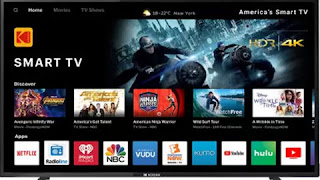 43 inch TV is priced at Rs 22,999, 50 inch TV is priced at Rs 27,999 and 55 inch TV is priced at Rs 31,999. Kodak has launched a new TV series on Flipkart. You can buy these TVs via online shopping on Flipkart from 1 September.
What is special
This TV has a quad core A53 CPU as well as a Mali-450 MP multi-core Graphics Processing Unit (GPU). This TV of XPRO series has 1 GB RAM and 8 GB flash storage. Apart from this, it also has a 24-watt audio unit, which includes the digital surround sound feature. This smartphone works on Android 7.1 operating system. Some applications are already installed in this television, such as Netflix, Hotstar, Amazon Prime, YouTube, Voot and Zee5.