Skip to content
Loading...
USNMix Report: First look of LG’s 5G smartphone released,
it will have double screen.
The report of the news agency Yonhap News said that the company has released a 15-second video, titled ‘Dual the Better’.
LG Electronics on Monday released a video featuring a glimpse of its second 5G phone, which has two detachable screens, which will be launched next month. LG plans to launch this smartphone at IFA in Berlin on September 6, four months after launching the ThinQ V50. IFA 2019 is Europe’s largest tech show. 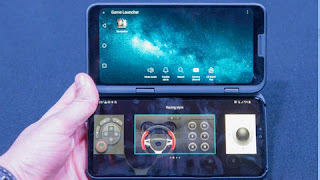 The report of the news agency Yonhap News said that the company has released a 15-second video, titled ‘Dual the Better’. A two-screen smartphone is shown in it. The Korean smartphone manufacturer has said that the new phone has used ‘free stop hinge’ technology, which enables the second screen to be placed in any position or folded like a laptop.
It is likely that the new 5G phone will be named V60, which will get strong competition from Samsung’s Galaxy Note. Samsung’s Galaxy Note 10 launched in August and Galaxy Fold will be launched in September.