Feb 28, 2019
Loading...
USNMix Report: LG launches its first 5G smartphone,
this feature is the first time in the world.
V50 ThinQ is a dual-screen smartphone with a display of 6.2 inches.
LG Electronics presented its flagship smartphones ‘V50 Thin 5G’ and ‘G8 ThinQ’ while presenting the V and G series on Monday. While ‘V50 Thin 5G’ is 5G enabled with dual screens, the ‘G8 ThinQ’ is equipped with the world’s first ‘Hand ID’ feature. Under this the phone verifies the user’s hand palms by scanning it. These devices were unveiled in the ‘Mobile World Congress’ (MWC) in Barcelona on Sunday. 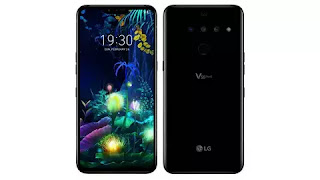 In a statement, the company said in a statement, “V50 Thinqu 5G” has a dual screen which has a design similar to cover case which provides a 6.2-inch “OLED display” to give users double viewing, playing games and multitasking experiments. Does. ” ‘Android 9.0 Pie’ and both smartphones present with these triple rear camera setup are equipped with the latest ‘Qualcomm Snapdragon 855 Chipset’.

The smartphone equipped with a 5G-enabled smartphone has a 6.4-inch “QHD Plus OLED Full Vision” display, the video depth control feature has been given to ensure the camera on the moving and rear-facing cameras. This smartphone is equipped with a 4,000 mAh battery and has been given ‘Snapdragon X50 5G’ for the advanced processing power required for 5G.
In order to bring its first 5G phone, LG has partnered with 10 major markets including the US, South Korea and Australia, where this year’s 5G service is going to be launched. In ‘G8 ThinQ’, LG has launched a lock-proof lock system that recognizes the user with the size, thickness and other personal symptoms of the nerves in their hands. The company further said, “It has been possible with the combination of ‘Z camera’ technology and Infrared sensors, which is more secure than fingerprint technology.”
The 6.1-inch ‘QHD Plus OLED Full Vision’ smartphone comes with six GB RAM and 128 GB internal memory and has a 3,500 mAh battery. Additional features like ‘Face Unlock’ and ‘Fingerprint Sansar’ have also been provided in this. There is currently no information about the price of these smartphones and availability in the market.