May 20, 2019
Loading...
USNMix Report: The expense of advertisement for Election in Facebook, Google
spent Rs 53 crores, BJP is ahead from all the political parties.
Political parties in India have spent more than Rs 53 crores in the promotion of Facebook and Google on digital platforms since February this year. The ruling BJP party has the highest share in this political promotion. According to a report related to Facebook advertising, 1.21 lakh political ads run on its platform from the beginning of February to early May 15th. Political parties spent Rs 26.5 crore on these advertisements.
The BJP spent more than 17 crore on Google
Similarly, on February 19, 2013, till date on Google, YouTube and its subsidiaries, political parties spent Rs 27.36 crore on 14,837 advertisements. The ruling BJP spent Rs 4.23 crore on over 2,500 advertisements on Facebook. Pages like “My First Vote for Modi”, “Talk about India” and “Nation with Namo” also spent Rs 4 crore on advertisements on social networking website. The BJP spent over 17 crore rupees on Google’s platform. 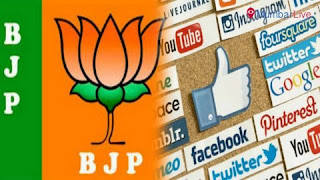