May 24, 2019
Loading...
USNMix Report: VVPAT seal on ‘Modi’s storm’,
but this seat has been done on Mismatch.
Lok Sabha Election Result 2019: The VVPAT slip count has been stamped on the huge victory made by the BJP. In the elections of 2019, the BJP has touched the record of 303 on its own. At the same time, BJP-led NDA has cleared the opponents by grabbing 354 seats. This time BJP has made a record more than the performance in 2014.
Mismatch due to machine breakdown
Opposition parties have always been accusing BJP of tampering EVMs. But this time the count of VVPAT has stamped on ‘Modi Tsunami’. Former Election Commissioner SY Quraishi said on Thursday night that till now the result of 294 has come to a close of about 10,300 VVPATs. Out of these, only one Mismatch is out in Andhra Pradesh. This happened because the machine was broken and it was replaced. The Election Commission is trying to settle this issue on behalf of the commission. Qureshi told that if a mismatch was detected on the same, then the number of VVPAT would be considered. 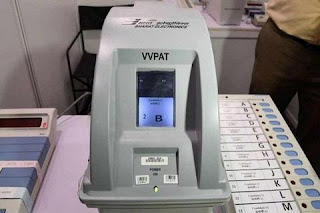 A total of 20,600 VVPAT counts
The former Election Commissioner also said that it is a big thing to not miss a mismatch in any of the VVPATs except for technical flaws. During the counting of the Lok Sabha elections, about 20,600 VPPATs have to be counted. According to the order of the Supreme Court, Election Commission had to declare the results after counting VVPAT slips. VVPAT was implemented by the Election Commission in the year 2013-14 as a pilot project.
VVPAT count on five booths of each assembly
Election Commission had decided to implement VVPAT for 100% of voting after questioning the credibility of EVMs on behalf of opposition parties. The opposition parties were demanding 100 percent VVPAT slips for all seats. While rejecting this demand, the Supreme Court said that VVPAT should be counted on five booths of each assembly.
Works like VVPAT Machine
VVPAT i.e. Voter Variable Paper Audit Trail Machine is added to EVM at polling place. After pressing the button in front of the favorite candidate’s name on the EVM, the voter can see the VVPAT screen for 7 seconds, who has voted for it. The visual, which is visible to the voter, becomes a slip and falls into a sealed box. On this slip, the name of the candidate, election symbol and party name is marked, which the voter has voted.