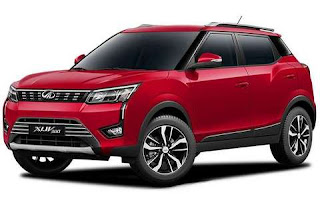 Mahindra & Mahindra, the country’s leading automaker, launched its much anticipated compact XUV 300 car in the Indian market on Thursday. This car was waiting for a long time in the Indian market. The company had already started booking it since January 9, and more than 4 thousand people have booked it. This company is the third sub 4 meter SUV in the country.
The starting price of the car is Rs. 7.9 lakh
Mahindra has given it a place above its earlier TUV 300 (TUV300) and NuvoSport. The starting price of the car is 7.9 lakh rupees. This price is of its W4 base variant, which comes in petrol engine. Dual tone color option will also be available in the car. Color combinations are available in blue and white colors except for red and white colors. Mahindra’s new car market will be available in 6 color options.
Dual airbags in base variants
Mahindra XUV300’s top variant W8 also includes airbags, leather interior, front parking sensor and 17-inch diamond cut alloy wheel. But it will be optional. Dual airbags have been provided in the base variant of the car. The company claims that compared to the other cars in this range, Mahindra has given much space, feature and bold design as per the promise in the XUV300.
Care and attention were taken care of
On the occasion of launch, Mahindra said that the company has taken care of safety, performance and other features in entry level variants. Talk about the exterior of the car, it is inspired by the cheetah. According to the company, the last seat in the car is wide compared to the cars of this range. Apart from this, due to the long wheelbase, it will prove to be comfortable for long distance travel.
Seat belt reminder for passengers The company said that when the idea of XUV300 came to mind, it was first discussed on its interior and it was taken care of the passengers’ comfort. There is also a seat belt reminder for all passengers in the car. There are three variants of the car, W4, W6 and W8. Mahindra XUV300 has been launched in two engine options- Diesel and Petrol.
Available in both petrol and diesel variants
The car has a 1.5 liter 4-cylinder diesel engine which comes with Mahindra Marazzo. This engine generates a torque of 300 Nm between 115 bhp at 3750 rpm and 1500 – 2500 rpm.
There is a 1.2 liter petrol engine, a three-cylinder turbocharged unit. It generates torque of 200 nm between 5000 rpm and 110 bhp power between 2000-3500 rpm. In the XUV300 the base model includes dual airbags, ABS, disc brakes on four wheels, 6 speed transmission, LED tail lamps and power windows.
The new XUV300 will be from Maruti Vitara Brezza, Ford Ecosport and Tata Naxon, which are already available in the collision market. Apart from this, it will also compete with Hyundai Crata and Reno Capture. Its base variant will be available in petrol engine of W4 7.90 lakh and diesel engine for 8.49 lakh rupees. Second segment of petrol engine variant of XUV300 W6 will be available in 8.75 lakh and diesel engine for 9.30 lakhs. Talking about top variants W8, its petrol variants will be available in 10.25 lakhs and diesel variants of 10.80 lakhs.