Mitron App, which has gone viral in the name of Swadeshi, has been removed from the Google Play Store. The decision has been taken on the Mitron App and for violating spamming and content policies. You will no longer find Mitron app on Google Play Store.
Let me tell you that when the protest started in India against Tiktok, the Mitron app suddenly went viral in the name of Swadeshi and more than 50 lakh people downloaded this Miron app. A later report revealed that the Mitron app is actually from Pakistan and has been bought and published on the Play Store.
Mitron app has been accused of copying content of other apps. Under Google content policy, no app can take content from another app and upload it to its app. Apart from this, all the features of this app are the same as Tiktok. Google has red flagged this app on the Play Store. 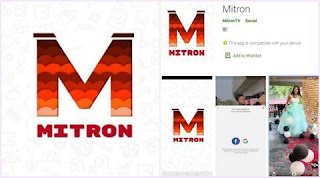 The Mitron App app was purchased from Pakistani software developer Irfan Sheikh, while it was claimed to have been developed by Shivank Aggarwal, a student at IIT, Roorkee. Let me tell you that the real name of the Mitron app is TicTac app after that resembled TikTok, which was created by Qboxus, the company of Irfan Sheikh of Pakistan.

Irfan Sheikh sold the source code of this app to someone for 34 dollars i.e. around Rs 2,500. Now the problem here is not from the developer and Pakistan, the problem is to promote in the name of Made in India and privacy. The truth is that there is no change in the Pakistani tictac app. Only the tictac has been named Mitron app.