Skip to content
Loading...
USNMix Report: Tax will be paid due to verification from the Aadhaar,
the order issued by UIDAI.
Unique Identification Authority of India (UIDAI) has issued a notification saying that business establishments have to pay a fee of Rs 20 for each customer-based service and Rs 50 for the verification of money transactions in the deal.
According to the UIDAI, for each service in E-KYC, Rs 20 will be charged for the service and 50 rupees will be charged for confirmation of ‘yes or no’ at every transaction of money. This fee will be tax-exclusive. 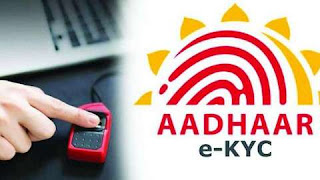 Govt. Establishments and post office free from Tax
According to this notification issued in the Gazette of India, Government Establishments and Post Office have been kept free of these charges. In this regard, an official said that earlier business establishments had to spend at least 150 rupees to 200 rupees for the verification of a customer without the facility of the Aadhaar. Both the companies and their customers have the facility of verification through the basis. Despite paying this fee for the Aadhaar Service, they will be in benefits.
These charges are to be paid within 15 days of the respective bills. After this, payment of duty will be made at a compounded interest rate of one and a half percent per month. Along with this, their base verification and e-KYC services will be stopped. UIDAI sources said that these charges would be in addition to the license fee and financial curb. Details of the code of deals and its charges will be released separately.